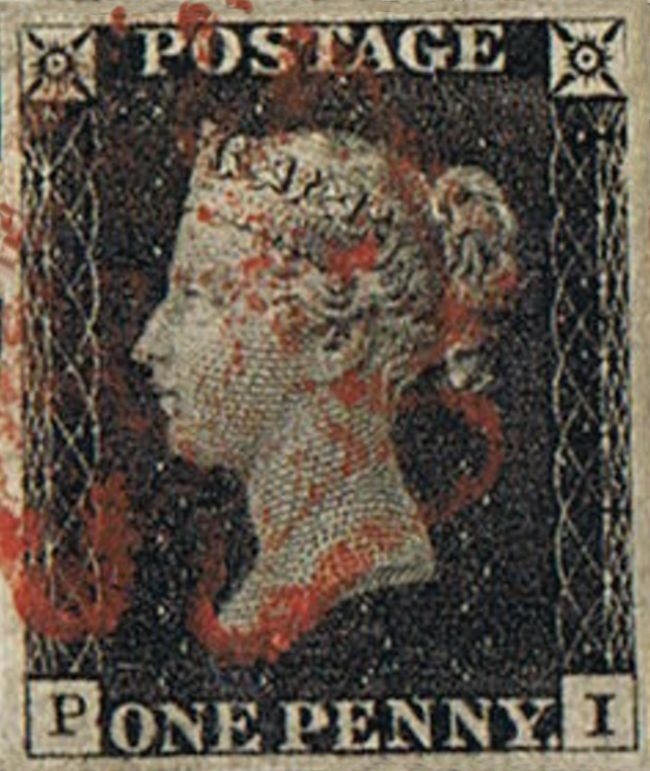 Compared to the letters and documents they're ordinarily affixed to, the postage stamp is a relatively new invention.

Even the Royal Mail, which was effectively established in 1516 when Henry VIII created the title of 'Master of the Posts,' predates the Penny Black by 324 years,

whereas correspondence by letter is at least as old as the use of papyrus (or wood, or stone) in Ancient Egypt some five thousand years ago.

Yet despite being late to the scene of world communication, the postage stamp, like all the best inventions throughout history, 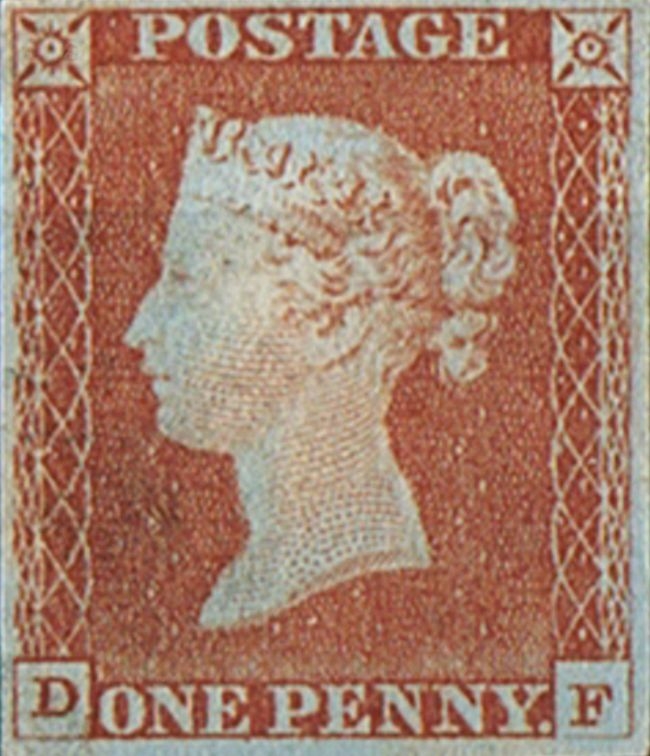 Before its advent, deliveries were paid for by the recipient, meaning that if said recipient neither could nor wanted to pay the fee the letter was simply taken away and disposed of,

and around the turn of the 19th Century this kind of an occurrence had become prevalent in rural areas which, falling outside the postal zone centred around London, were charged 3d for delivery rather than 2d.

Due to the burgeoning nature of the postal system these kinds of discrepancies in service were commonplace, yet in 1834 the General Post Office refused calls for the 2 Penny Post to be extended outside of London and other urban centres

It was not until the publishing of Rowland Hill's influential pamphlet, Post Office Reform: its Importance and Practicability in 1837 that a viable alternative was proposed, and in 1839 the Postage Act was passed by parliament,

authorising his plans for a universal, prepaid penny postage system and implementing them on the 6th May 1840 when Penny Black stamps and Twopenny Blue stamps were officially issued along with the Mulready,

an envelope that had the postage rate pre-stamped on it.

The Exchequer had arranged a competition in 1839 to design the former two,

yet since none of the entries had been considered suitable the Treasury chose a design based on the 1834 sculpture of the then 15 year-old Princess Victoria by William Wyon,

a design endorsed by Rowland Hill and eventually realised by the printing firm Perkins Bacon, who also printed 1 pound notes for English banks.

The resulting Penny Black, despite having a print run that amounted to an impressive 286,700 sheets and 68,808,000 individual stamps, was undoubtedly an experimental product, and in 1841 it was replaced by Penny Red stamps,

primarily because black, the least commonsensical choice of colour for stamps, had been found to make it difficult to spot cancellation marks 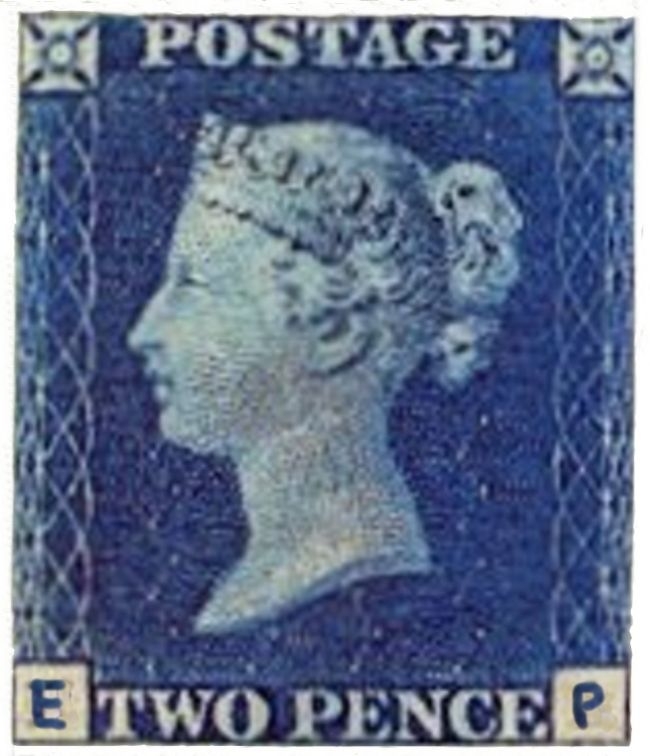 Like the Penny Black stamps and Twopenny Blue stamps before it, the Penny Red stamps were of line-engraved manufacture,

a process which involved the multistage engraving of recesses onto the reverse of a steel printing plate and then the use of this plate to print the stamps in sheets of 240 (20 rows of 12 stamps ( meaning that one sheet was worth exactly 1 pound).

Despite a small and error prone run of embossed stamps trialled through 1847-54, this method of production proved dominant up until 1879, which was the year that saw Perkins Bacon lose its stamp printing contract to rival De La Rue.

The latter firm used surface printing to produce its stamps, and with the earlier introduction of perforation in 1854 (to rectify the imprecision and inefficiency with which imperforated stamps were cut from their sheets using scissors)

this change saw the neonatal postage stamp settle into a standardisation that would last it until 1971 and the arrival of a decimalised currency. 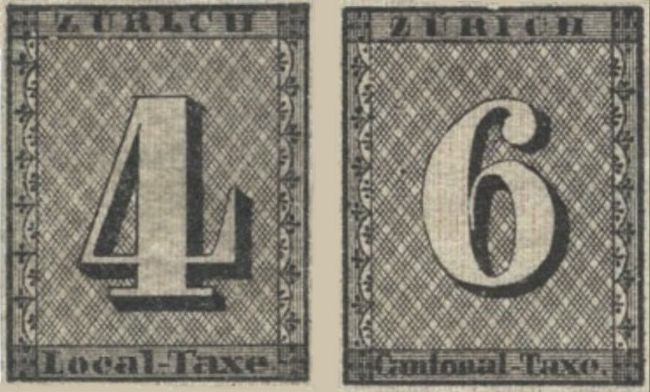 It wasn't long after these tentative first steps that other nations followed Britain by issuing their own stamps, the next in line being Switzerland with their Zurich 4 and 6 rappen on March 1st 1843,

which were in fact only regional rather than nationwide.

These two stamps were the first in continental Europe. 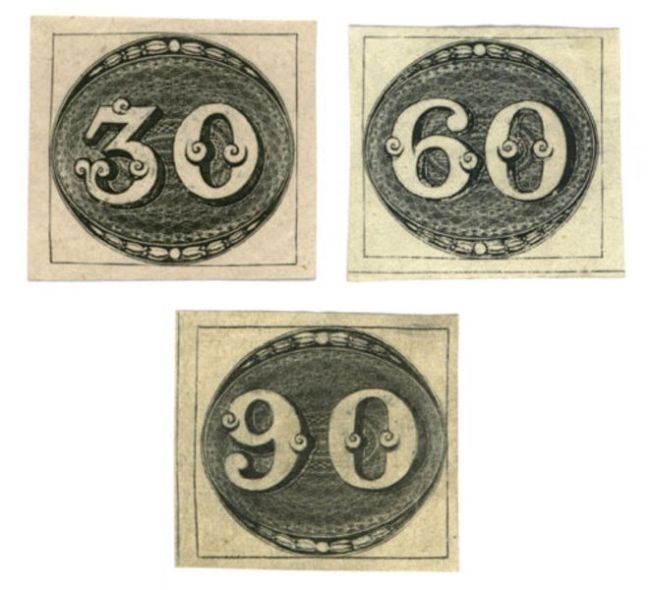 On the 1st August 1843 Brazil became the first country of the Americas to update their postal system in similar fashion, beating the United States to the punch by four years with a trio officially dubbed the Bull's Eye stamps.

Made with the same model of printer as the Penny Black, these stamps also didn’t include the country's name on their design, a practice eventually ruled out for all nations bar the UK as a result of the coordination of mail in the emerging global postal system, 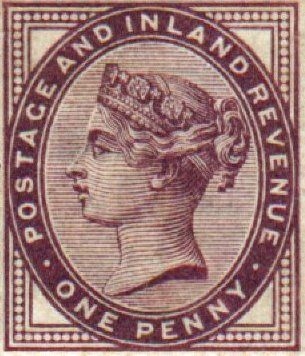 Returning to Britain however, there were several other changes of note between the contracting of De La Rue and the advent of decimalisation, the first of which being a direct consequence of the Customs and Inland Revenue Act of 1881.

This stipulated that all new stamps must also double as revenue stamps, which on their own had in fact been in use for over a century prior to stamps, coming into existence after the 1694 Stamp Act had established a tax on legal documents.

As a result the Penny Lilac was first issued on the 12th July 1881 bearing the inscription 'POSTAGE AND INLAND REVENUE,' and it remained the standard letter stamp for the rest of Victoria's reign.

Another significant development, and one which was greatly influential in taking the postage stamp from a largely utilitarian object into a cultural artefact able to excite appreciation and interest,

was the issuing of the first commemorative stamps under the reign of George V.

These stamps - a pair featuring a reduced profile of the King beside the proud figure of a lion - marked the holding of the British Empire Exhibition in Wembley during the years of 1924 and 1925.

Other commemorative stamps soon followed, including a set marking the 9th Congress of the Universal Postal Union in 1929,

an empire-wide omnibus issue celebrating the coronation of George VI in 1936 and of course a set in 1940 commemorating the centenary of the postage stamp itself. 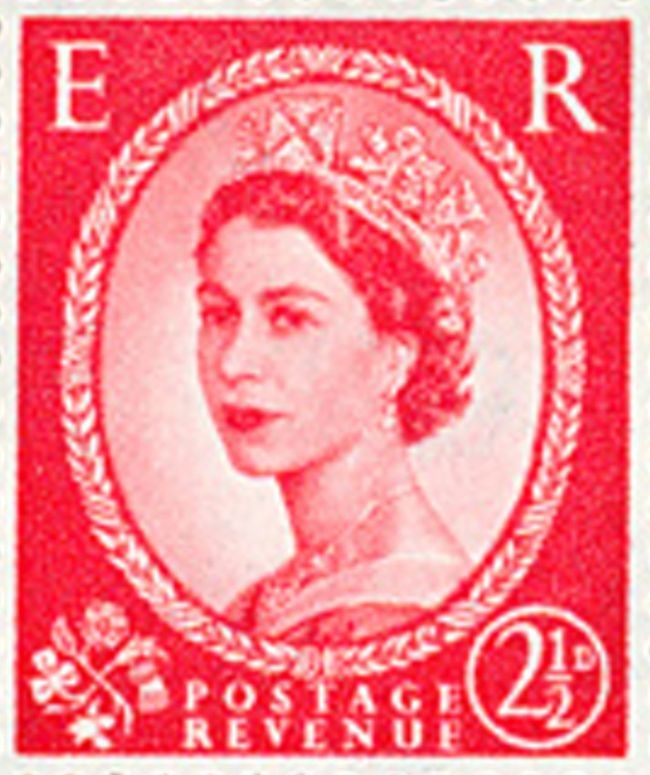 By the time Queen Elizabeth II succeeded to the throne in 1952 the stamp was a familiar object, and it was only 15 years into her reign in 1967 when designers settled upon the definitive series which persists to this day.

Initially the Wilding series of stamps had been the standard for the UK, a design featuring the Queen half turned towards the viewer.

It was this aspect of the image in particular which was objected to in a letter written to the Post Office in 1961 by two influential stamp designers, Michael Goaman and Faith Jacques.

They held that the design, by virtue of being in contradistinction to the practice of depicting each successive head of state in profile,

represented the person of Elizabeth more than the monarchy itself, and they also argued that the portrait was difficult to include in commemorative stamps. 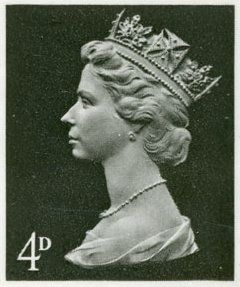 Therefore in the summer of 1965 the Post Office and the Stamp Advisory Committee invited artists to submit designs,

while the then Postmaster General Tony Benn suggested that the royal image should be replaced by the name of the country (either ‘U.K.’ or ‘Great Britain’),

a suggestion which was shot down in part because of private opposition from the Queen herself.Of all the artists to have submitted work to the Post Office,

it was the sculptor Arnold Machin who did most to impress the SAC, and on the 5th June 1967 it was his sculptor of the Queen (wearing a diadem crown made for George IV;s coronation in 1820) that adorned the newly issued Machin series,

distinctive for its uncluttered design and palette of bold singles colours. These are the definitive stamps still in use today,

and the refusal of the Queen to approve any changes on three separate occasions - in 1981, 1985 and 1990 - makes it very likely that they will not see any cosmetic changes until the succession of the next monarch.