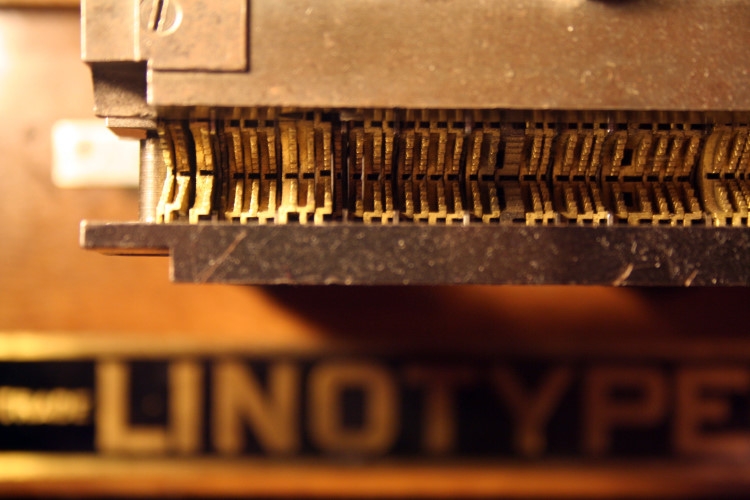 How printing processes and techniques can affect a stamp’s value

Eggs are eggs, as the old saying goes. However, you can’t really say the same thing for stamps. Because while stamps all serve to pay for postage, they vary in many, many ways. And one of the subtler ways in which stamps differ is through the printing processes and techniques used to produce them.

Such processes and methods have evolved over the years, becoming more sophisticated with each era of stamp printing. For the newcomer, it may initially be difficult to tell one printing process from another. However, identifying the printing method used for any given stamp can sometimes help in identifying it, which in turn is important if you want to have an idea of how much it’s worth.

Accordingly, this article offers an overview of the main printing processes and methods used for postage stamps. 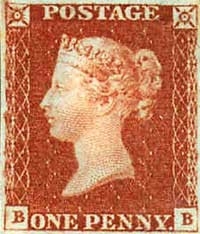 The most common printing process used for British and Commonwealth stamps issued before 1970 is known as intaglio. Intaglio stamps are printed from copper or steel plates, with the area of the image to be printed being recessed into the surface of these plates. Next, the recessed area is filled with ink, while high pressures and temperatures are used to transfer the ink to the paper.

Not only can you see the ridges of ink created by the recessed intaglio process, but you can usually feel them too. These ridges are created by the paper of the stamp being pushed into the plate’s recesses.

There are two basic sub-categories of intaglio stamps. The first, and earliest, are line-engraved intaglios. With these, a die is carved by hand and then used to impress printing plates, which are then used to print the stamps.

Famous examples of line-engraved stamps include Britain’s first-ever postage stamp, the Penny Black, as well as the Penny Red (above) and Two-penny Blue. As noted in the section below, line-engraving was used for the vast majority of Queen Victoria stamps up until 1855, when surface printing became more commonly used.

The second, and later, sub-category is known as photogravure. This was first adopted in Britain in 1934, during the end of George V’s reign, and is still used to this day. Here, photo-chemical etching is used to create recesses in the printing plate. In most cases, dots rather than lines are used to create the stamp’s image: 'screened' dots share the same size but have different depths, while ‘unscreened’ dots vary in both size and depth, creating a grainier look. 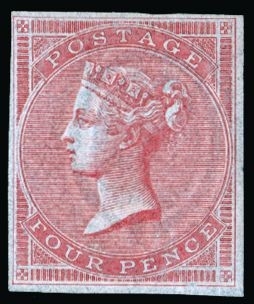 First used in Britain with the 1855 Queen Victoria 4d carmine issue (above), most low-value British postage stamps were printed using the letterpress method up until 1934. With letterpress printing, the image to be printed is raised in relief on the printing plate. Next, the ink is rolled across the plate, which is then used to print the design onto the paper.

Letterpress stamps are also known as surface-printed or typographed stamps. From 1855 until the end of Queen Victoria’s reign, all of Britain’s surface-printed stamps were produced by De La Rue & Co., which still prints banknotes, passports and tax stamps to this day. 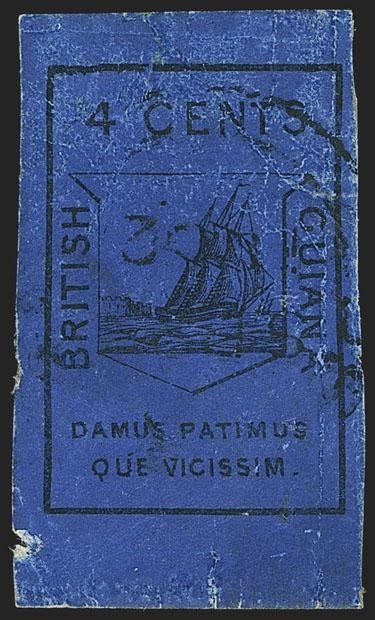 Originally, Planographic stamps were printed using a stone or metal plate. In contrast to intaglio and relief printing processes, the plate used in Planographic printing – as indicated by the root word ‘plano’ – is flat. So rather than raising or recessing an area of the plate to create the design of a stamp, ink is applied directly to the plate, while water is applied to those areas not to be printed. This is based on the assumption that oil and water don’t mix.

There are three sub-categories within the Planographic family. The first are lithographed, which are printed directly to paper and which have been in production since at least the 1850s. Some of the earliest examples are several British Guiana stamps printed from 1852, including the 4c. Black on deep blue (above), printed by Waterlow & Sons, which was acquired by De La Rue in 1860.

Generally, lithographed stamps lack the ‘three-dimensional’ quality of most relief stamps. They also tend to have sharper and cleaner edges than photogravure stamps.

Offset lithography is another Planographic sub-category. Used on modern stamps (such as the QEII Machin stamps), this printing method involves using the stone or metal plate to print to an intermediary medium (e.g. rubber) which is then applied to the paper.

More recently, photo-lithography involves using light to transfer a design from a photomask to a light-sensitive photoresist, which is then photo-mechanically etched to the paper. 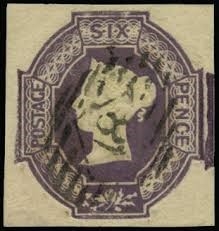 Much less common than stamps printed using the three above methods, embossed stamps are printed by pressing the stamp paper between a recess and a relief die. This gives the resulting stamp a three-dimensional shape, protruding outwards from one side and inwards from the other.

Normally, embossing is used to create postal stationary. However, Britain issued three embossed stamps between 1847 and 1854, the 6d mauve/purple (above), 10d brown, and the 1/- green.

More recently, embossing has been used to produce a small number of commemorative stamps.

There are four main printing processes divided as follows: