Aden is a city in Yemen. Aden's location made it a popular exchange port for mail passing between places around the Indian Ocean and Europe. Mail is known to exist from June 15, 1839, although a regular postmaster was not appointed until 1857.

Aden used postage stamps of British India until it became a crown colony on April 1, 1937. Although these stamps carried no special identification they may be recognised through the use of the number 124 in postal cancellations, which was assigned to Aden as part of the Indian postal number system.

In 1939, a new issue of stamps included a portrait of King George VI, but the sultans in Hadhramaut (whose territories had been under the British Aden Protectorate since the 1880s) objected to this, and so the British government issued separate stamps in 1942, but with the additional inscriptions Kathiri State of Seiyun and Qu'aiti State of Shihr and Mukalla (later Qu'aiti State in Hadhramaut), plus portraits of the respective sultans. All of these types were valid in Aden and the Aden Protectorate.

Shop By
Now Shopping by
Clear All
Shopping Options
Category 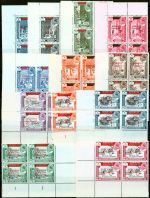 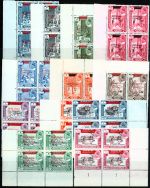