Located in the Caribbean to the east of Puerto Rico. First post Office opened in 1787.

Before 1866 un-overprinted British stamps were used which may be identified by the cancel A13 for the main city Tortola.

The first stamps were produced in 1866 and included a depiction of St. Ursul] who, according to legend, had 11,000 virginal handmaidens, and after whom the islands had been named.

Since 1968 the stamps have been inscribed British Virgin Islands rather than just Virgin Islands as they had been before. This was to avoid confusion with the American Virgin Islands which are administratively separate and use United States stamps. 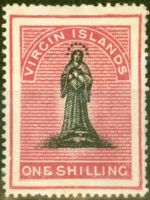