New Hebrides was the colonial name for an island group in the South Pacific, now called Vanuatu

The New Hebrides were colonised by both the British and French in the 18th century shortly after Captain James Cook visited the islands. The two countries eventually signed an agreement making the islands an Anglo-French condominium, which lasted from 1906 until 1980

One of the outcomes of this arrangement was that both countries issued their own postage stamps for the islands, although towards the end of the Condominium, there were joint issues with the initials ER (Elizabeth Regina) for the UK, and RF (République Française) for France 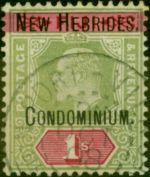