Pitcairn Islands form a group of four volcanic islands in the southern Pacific Ocean. The islands are a British overseas territory, the last remaining in the Pacific. The islands are best known as home of the descendants of the Bounty mutineers The postal history of the Pitcairn Islands can be traced to second half of the 19th century, when outgoing mail was hand stamped as "Posted on Pitcairn Island: no stamps available." Letters were carried by passing ships and received postal stamps and cancellation at various ports of calls. However, this practice was discontinued in 1926 following reports of ship passengers mixing their own mail into the “no stamp” system set aside for the Pitcairn residents 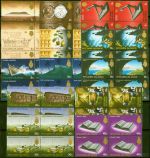