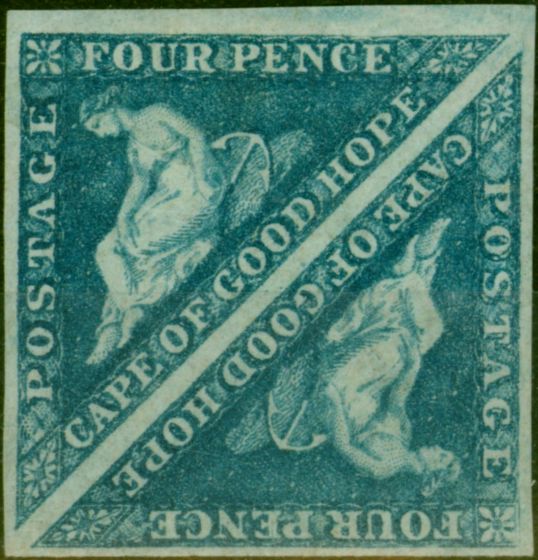 The rocky headland of the Cape of Good Hope, sitting on the Atlantic coast of the Cape Peninsula in South Africa, has long been of historical significance to intrepid sailors who used it as a waypoint on their treacherous sea voyages to the far East. The Cape of Good Hope was a British colony from 1814, becoming self-governing in 1872, and uniting with three other colonies to form the Union of South Africa in 1910.

From the Portuguese explorer Bartolomeu Dias – the first European to reach the Cape in 1488 and establish direct trade relations with Asia – to the British, French, Dutch, Danish and Portuguese seamen who, on reaching the busy harbour, found solace in exchanging letters with loved ones via an improvised postal service, the Cape's maritime, postal and fiscal history is of great interest to modern-day philatelists.

It wasn't until the 17th century that sailors, desperate to make contact with the rest of the world, came up with an ingenious scheme of sending letters back home. They would find large rocks or boulders and etch particular details (names, their ship's prefix, captain's name, and the dates of their arrival or departure) into the stone and place them around the harbour with bundles of letters buried near or underneath them. The hardy sailors then pinned their hopes on them being discovered and taken aboard ships sailing back to Europe, thus connecting thousands of men to their homelands over several continents.

Many of these remarkable post office stones, with their personal messages and nautical information, have been discovered in the course of excavations and are housed in museums in Cape Town. They remained the only postal system on the peninsula until 1792 when Johan Isaac Rhenius, the acting governor, opened a post office in a room at the castle of Cape Town.

By the end of the 18th century, inland post was being regularly delivered by a variety of other means. Farmers on horseback distributed letters and small parcels between Algoa Bay and False Bay, a twice-weekly post wagon ran between Cape Town and Stellenbosch, and enslaved indigenous people of the Cape were also being used to distribute letters and parcels. In 1815 a postal boat was finally introduced between England and the Cape to transport official mail, and in 1848 postmen were appointed to deliver letters to Cape of Good Hope inhabitants who acquired their first official post-boxes in 1860.

The Cape now had a reliable postal system that continued to develop. A mail train was introduced in 1883, and with the advent of diamond mining in South Africa came a normal recorded postal service through which the world's largest gem was sent to London in 1905. By 1919 a regular domestic motor car and air-mail service had been introduced, with an overseas air-mail service in place 13 years later.

Known as the ‘Triangulars’ due to their unusual shape, the first Cape of Good Hope postage stamps – a one penny (1d) in brick-red for a newspaper, and a fourpence (4d) in blue for a half-ounce letter – were issued by the colony on 1st September 1853. Believed to be inspired by the large triangular obliterator used by the Cape Revenue Department from 1839, the stamps were printed in London on sheets of a special handmade paper, with 240 stamps per sheet, not perforated, and measuring 282 mm by 536 mm. They featured the reclining figure of ‘Hope’ (a female figure seen in profile) engraved by William Humphrys, an employee of the printers Messrs Perkins, Bacon & Co.

In February 1858, two new values became available: a sixpence (6d) for half-ounce letters to Great Britain, and a one shilling for postage to some foreign countries. These stamps were still unperforated and had to be cut individually with scissors. Thus in 1860, the Cape’s Postmaster-General requested that future stamps be perforated. This posed technical problems, eventually resolved by Messrs De La Rue and Co, a British company that recommended changing the shape of the Cape stamps to approximate those of Great Britain (which were rectangulars). In the meantime, De La Rue continued to supply one penny and fourpence triangulars, after the Crown Agents transferred the contract to them from Perkins, Bacon & Co. The switch to a rectangular format eventually took place in 1864.

De La Rue were relatively new to postage stamp printing, having won their first contract in 1855 for the ‘Fourpenny Carmine’. Their use of innovative printing techniques led to contracts to print stamps all around the world, and the beginning of a security print business which is still going strong today.

In 1860 a consignment of stamps from England went missing, leading to shortages. A local printing firm (Messrs. Saul Solomon & Co) were therefore engaged to print a supply of 1d and 4d stamps, commonly known as the ‘Woodblock’ stamps. Each sheet of stamps was printed from 64 separate ‘cliches’, or small steel plates, glued on to a wooden block, leading to many minor variations within each set. To the delight of collectors, two cliches were accidentally transposed, resulting in one colour error per sheet of 64 – a blue 1d stamp. and a red 4d stamp – which are naturally highly prized. The missing consignment from London turned up a year later.

Even rarer is the Cape of Good Hope 4d black triangular stamp, of which only 12 copies have been authenticated. There are numerous theories as to how this stamp came into existence, though none has been conclusively proved. These theories include: they were regular stamps that changed colour, perhaps because of immersion in seawater; they were specially printed to mark the death of the Prince Consort in 1861; or (perhaps most likely) they were printing proofs which weren’t supposed to go into circulation. What is known is that printed by Perkins Bacon & Co. on white, watermarked paper which was in use for printing the issued 1d red and 4d blue stamps of 1855-63, and that they were first listed in a French stamp catalogue published in 1861.

Stanley Gibbons and the church raffle