Help and Advice on Stamp Collecting 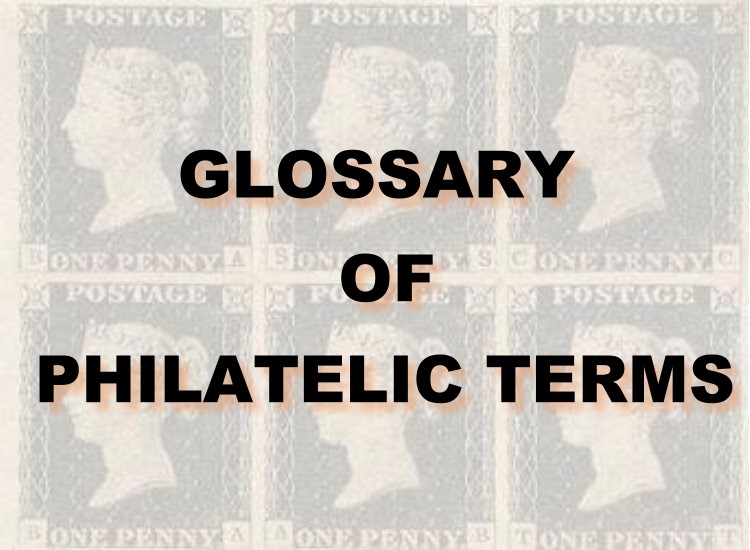 Philatelic terminology can be daunting for the beginner or less experienced stamp collector. However, as with most jargon, philatelic terms are pretty straightforward once you know what they actually mean. So to help you make sense of the occasionally obscure language stamp dealers’ use, here’s our glossary of the most common philatelic terms.

Also, if there are any terms we’ve forgotten here, feel to get in touch and remind us.

A stamp that is gummed.

The postage of mail via air. Airmail stamps are stamps used only for sending airmail.

A design impression without any ink or colour. Rare on stamps.

An ink or dye that has a coal-tar base and is soluble in water.

A selection of stamps sent to collectors, who choose the stamps from the selection they wish to buy, before sending the remainder back to the relevant dealer.

A stamp cut into two halves, both of which were used for postage. One half of a bisect had a postage value of half the original stamp.

An uncut sheet of at least four stamps, usually forming a square or rectangle.

A stamp with a shorter than average perforation.

A small book of stamps, in which the stamps form several panes or sheets that are stitched or glued together.

A marking, design or description on a commemorative envelope or limited-edition cover, used to indicate the event being commemorated by the stamps with which they appear.

An authorised mark, handstamp or frank applied to a stamp in order to indicate that it has already been used for postage.

The position of a stamp’s design within the stamp’s border or perforations. Stamps with their designs exactly in their centres are described as well-centered.

Stamp paper coated with a chalky solution in order to prevent fraudulent removal of postmarks from used stamps, which would damage the stamp's design.

A stamp which charged a premium or surcharge for charitable or special purposes. Also known as a semi-postal stamp.

One of the earliest stamps issued by a country, often rare. Rare modern stamps are sometimes referred to as modern classics.

Stamps produced in long, single-row rolls, often for use in vending machines. Coil stamps usually have two straight edges on opposing sides, and perforated edges on the other two opposing sides.

Type of perforation in which three sides of a stamp are perforated at once for a comb-like pattern.

An envelope, postcard or piece of postal stationary which has been sent by post.

A squared cut out of a sent envelope or postcard which bears a used postage stamp and usually has wide margins.

Letters and/or numerals that can be used to identify the cylinder used to print stamps, usually displayed in the margins of stamp sheets.

A stamp issued for ordinary postal use which is printed in indefinite quantities and for an indefinite period of time.

The face value printed on a stamp

Adhesive gum that has been damaged or spoiled in some way.

The process of printing a stamp or piece of paper in relief, so that the design being embossed is raised in relation to the surrounding material.

A significant flaw or mistake in the design of a stamp, caused due to a printing or production error.

A trial or test version of a stamp, sometimes with a slightly different design to the final production issue.

The price, value or denomination of a stamp, as printed on its face (i.e. front).

A cover (such as an envelope or postcard) that has a cancellation or postmark bearing the very first date its stamp was issued.

A defect in a printing plate that results in the same blemish or mistake in a stamp’s design. Similar to an error.

A fake copy of a stamp.

Black vertical lines printed on the reverse of GB definitives from 1957 to 1959, so that they could be processed by automatic letter-sorting equipment.

A pattern of parallel lines or dots embossed on a stamp, causing ink from a cancellation mark to seep through the stamp and prevent it from being reused.

The layer of adhesive glue on the rear of an unused stamp. Gum can bend, crease or wrinkle stamps in cases where the paper of a stamp shrinks and the gum does not shrink to the same extent.

The blank margins dividing a sheet of stamps into separate panes and allowing them to be perforated.

A small folded square of paper used to affix stamps to the pages of albums.

Used to describe a stamp which has been printed without any perforations, so that all four sides of the stamp have straight edges.

The name of the printer or issuer of a stamp, as printed on individual stamps or on stamp sheets.

Used to describe a stamp which bears a design or marking that’s inverted (usually upside down or rightside left) in relation to the rest of the stamp.

A basic stamp design used in more than one country, with only the country name and price differing from one issue of the key type to another.

Row or line of perforation holes used to separate individual stamps on a sheet.

A stamp that was used only within a specific area or territory within a country.

A maximum card comprises a postcard, stamp and cancellation which all bear some relation to each other, such as being issued at the same time or sharing the same designs.

An unused, perfectly preserved stamp which bears its original gum. Mint never hinged (MNH) stamps are mint stamps which have never had hinges affixed to them.

An envelope or letter sheet issued in 1840 which bears a pictorial motif designed by William Mulready.

A stamp issued and used to post newspapers or other written material.

A stamp which bears a postage class (e.g. 1st, 2nd) rather than a monetary value.

Used to describe a stamp no longer sold by the Post Office but which may still be valid for postage.

Used to designate a stamp for use only by a government or government agency.

A stamp with an additional print superimposed over its original design. Overprints are often used to change the value of a stamp.

Part of a sheet of stamps.

A stamp which has had initials or letters punched into it using perforations. Commercial or governmental organisations often used perfins for security purposes.

The process of punching holes between individual stamps on a sheet in order to make them separable. Perforation gauges are used by collectors to count the number of perforations a stamp has.

The study of postage stamps and postal history. Also refers to the collecting of stamps. (see end of Terms for it's origin)

Any stamp treated with a phosphorescent substance that can be detected by an automated mail sorting system.

Used to describe a stamp bearing a picture of some kind, rather than a portrait or coat of arms.

A block of stamps featuring the number of the plate they were taken from on one of their margins.

The number identifying the printing plate used to print a stamp or sheet of stamps. May contain letters as well as numerals.

Postcards or any other postal material which bears imprinted or impressed stamps on them, as opposed to stamps which have been separately affixed.

A mark which confirms the date, time and/or location of a stamp’s postage, and which cancels the stamp for future use.

A postmark which cancels a stamp before it’s used. Precancels are usually used for the purposes of bulk mail, where individual cancellations are impractical.

A commemorative booklet of stamps issued to mark a particular date or occasion.

A trial stamp printed to test the printing plate or die for any faults or defects.

A stamp issued and used for temporary purposes.

Refers to stamps issued by Royal Mail for regional use in Scotland, Wales, Northern Ireland, Guernsey, Jersey, and the Isle of Man, as well as other regions within Britain and the Commonwealth.

A stamp which has unofficially had new gum applied to its reverse side.

Stocks of a stamp which are unsold at the time an issue is declared obsolete.

A stamp printed using an original plate after its issue has become postally invalid.

A stamp indicating the payment of a fee or tax.

Post transported using a rocket or projectile. Rocket mail trials and experiments were conducted in the early 20th Century, with stamps, cancellations or labels being printed to send mail via rocket.

Slits or cuts in the margins of stamps, intended to make separation of individual stamps from sheets easier.

Another word for margin, the blank paper used to separate individual stamps on a sheet.

Used to describe stamps issued together on the same sheet, but which have different values and/or designs.

A flawed or poor quality stamp used to fill the relevant place in a stamp album until a better specimen can be found.

A stamp used as a proof or example, overprinted with “specimen”.

Used to disguise a stamp which has one or more edges without perforations, but which is not an imperforate stamp.

A pair of adjoining stamps which are upside down in relation to each other.

Used to describe a stamp which has thinner paper in one or more areas of its reverse.

American term for tweezers, which are used to safely handle stamps.

A stamp or set of stamps which relate to a specific theme or subject. Also referred to as “thematic.”

A stamp without any gum.

A stamp that has never had hinges affixed to its reverse.

A stamp which has been posted and stamped with a cancellation or postmark.

A stamp which differs in some way from normal copies of its issue. Its difference may come from watermarks, missing or wrong colours, imperforates, or errors.

The central part of stamp’s design.

A semi-translucent design or pattern visible on the reverse of a stamp. Formed by deliberately thinning it.

The name given to definitive GB stamps issued from 1952 which feature Queen Elizabeth II’s head as photographed by Dorothy Wilding.

Used to describe stamps with wider margins on one side, which arise because the sheets they’re printed on were perforated and cut down the middle, leaving an oversized margin on either side.

Where does the term 'philately' come from?

'Philately' derives from the Greek words 'phillo', meaning an attraction to something, and 'ateleia', meaning exempt from tax (the introduction of the postage stamp meant letter no longer had to be paid for at the point of delivery). It is thought the word was created by French philatelist Georges Herpin who coined the term 'philatelie', of which the English version is 'philately'.