In Depth Look at Valuable Stamps 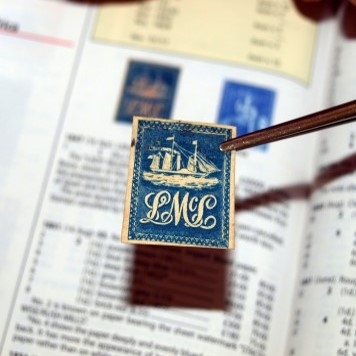 The stamp was issued to prepay mail carried by the steamer LADY MCLEOD which plied between Port of Spain and San Fernando.

The ship, named after the wife of the Governor of Trinidad, was built at Govan by Robert Napier, being completed on 2 September 1845.

She was a 67-ton paddle steamer, just over 109ft in length, and was built for John Lamont, her first master being David Bryce.

Bryce became her second owner in December 1845. Her third owners, in 1851, were fi ve Trinidad merchants. She foundered in 1854 off Vistabella Point near San Fernando and was abandoned.

The ship’s bell was salvaged, and after serving various purposes was, in 1948, lodged in the offi ce of the Town Clerk, San Fernando.

Although this issue did not emanate from an offi cial source, the Lady McLeod (as the stamp is commonly called) has the glamour of being the fi rst adhesive stamp issued in a British Colony, the ‘POST OFFICE’ Mauritius appearing some six months later.

The full background to the Lady McLeod issue has been given a number of times.

“The Subscriber experiencing inconvenience in collecting the Money for Letters of Non-Subscribers, has procured Labels, which may be had of him or the Agents for the Steamer, at fi ve cents each, or Four Dollars per Hundred”.

“No other Letters but those of subscribers who have paid in advance, or such as have these labels attached, will be carried, from and after the 24th instant”.

“Freight for parcels and small packages as heretofore.

The inconvenience referred to was the matter of providing suffi cient small change.

Previously the owners used to carry letters at ten cents or fi ve pence each, and as people were in the habit of sending large pieces of money to pay, the Captain used to be at his wits’ end to scratch up the small change required,so the expedient of the stamp was adopted.

Letters and small parcels were carried free for subscribers who paid one dollar per month.

The notice points to 24 April as being the date of issue, but a once sealed letter bearing the stamp has been recorded, the letter being dated 11 April 1847. The notice suggests, in quoting a price per 100, that perhaps the stamps were in sheets of 100.

No multiple piece appears to be known, though single copies can be found showing traces of an adjoining stamp.

No details are known about who designed or printed the stamp, though the thick yellowish paper (and the colour of the ink) is similar to that of the 1852 printing of the Lithographs.

This has led to suggestions that, notwithstanding the fi ne quality of the production, the stamp could have been prepared locally, and possibly that Charles Pétit could have been responsible for this issue as well as the Lithographs, since he was in the Caribbean at the time.

The stamp was undoubtedly lithographed, but the fi neness of parts of the design suggests that the original die was engraved.

The stamp is a remarkably fi ne production and the handsome deep blue colour combines to make it most attractive.

Some copies can be found in paler shades but it is diffi cult to say if these are in their original colour. Some appear reasonably fresh, but others appear faded or treated in some way.

For instance, a paler shade on entire of 30 August 1847, has a certifi cate stating that the stamp has been “removed, treated and replaced ”.

Used copies may be found cancelled in one of three ways: The more usual is a pen-marked cross in the form of an ‘X’.

Occasionally, copies are found more elaborately cancelled in ink, with, for example, a series of diagonal lines, or with a portion of the surface skimmed off, reminiscent of the early days in Afganistan.

Copies also exist on entire, but without cancellation of any sort. Some so-called unused copies may well have come from such covers.

The collector should beware of stamps with a pen-cancellation faded out masquerading as unused. It is perhaps worth mentioning that the pen-cancellations rarely tie the stamp to the cover.

There is next given, without comment, a reference which others may be able to follow up, but which so far appears to be an isolated one.

In referring to Trinidad, Stanley Gibbons’ Monthly Journal of 31 May 1895 reports: “ Messrs. Cameron & Co. have shown us a letter from this Colony in which it is stated that the Governor, Sir Napier Broome, had ordered all the old stock of stamps, postcards, etc., to be destroyed. Amongst these things was the die of the old ‘Lady McLeod’ stamp, the destruction of which may be regretted; but when we learn that an American gentleman offered £3,000 for the die we cannot but feel that it is better out of the way.”.

The letter adds: “His Excellency seems to be altogether opposed to philatelists and their works”. It is believed, on the contrary, that the hearty thanks of philatelists are due to Sir Napier Broome on this occasion for saving them from reprints of the Lady McLeod.

Collectors may like a comment on the availability of examples of the Lady McLeod. One or two of the big collections have contained several copies. The Caspary collection contained a single, the Hurlock collection one unused and four on cover, and the Charlton Henry collection one unused with gum, and four on cover. The relevant auction catalogues may be consulted for details. Apart from these, perhaps one or two copies are sold each year, but this is only a very rough guide.

There is always keen competition for them, and even damaged copies fetch a high price. Genuinely unused or mint copies are of the utmost rarity.

Although an unofficial issue, the Lady McLeod stamp was the first adhesive postage stamp ever issued relating to “post by sea.”

85 Stamps are known to exist,

The vast majority, if not all, of the stamps have faults to some degree